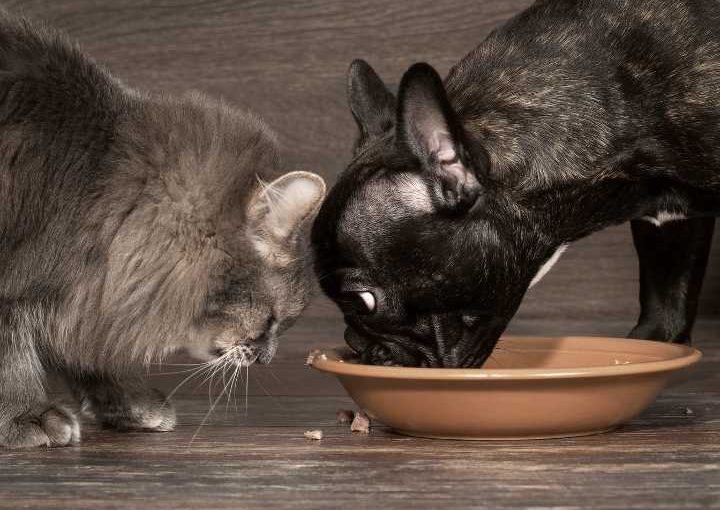 Can Dogs Eat Cat Food? (Here’s What You Need to Know)

Having cats and dogs in the same household can be rewarding. You’ll enjoy twice as much love and companionship. Plus, it’s not uncommon for dogs and cats to become friends. However, there are times when having a dog and a cat under the same roof can be challenging.

They’re likely to have an occasional spat or two. Plus, some canines are opportunistic and will chow on your cat’s food, leading to an unhappy feline. What about your dog? Is there any harm in letting your dog snack on cat food? The answer might surprise you. 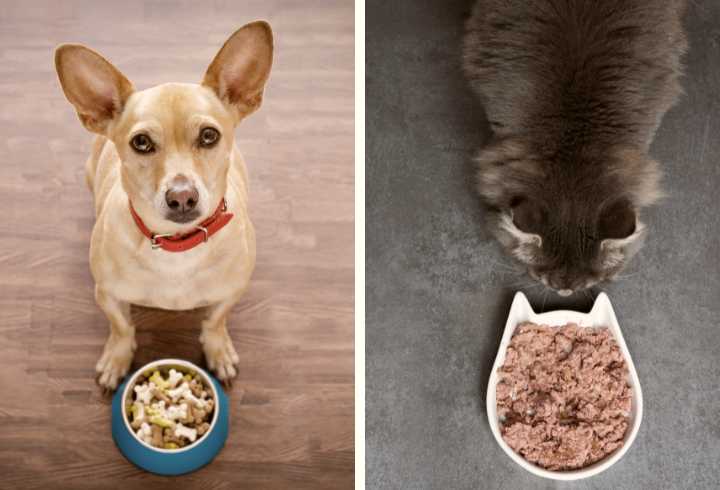 Some dogs will eat anything. If you have a canine-like that, you’ll probably find it difficult to keep them away from your cat’s food dish. It might not seem like a big deal. The truth is, there are some notable differences in the way cat and dog food are formulated. Allowing your canine to dine unchecked out of your feline’s bowl could cause some health issues.

For one thing, cats are obligate carnivores, which means their bodies require certain nutrients that can only be found in animal flesh. Their systems also have a hard time digesting carbohydrates properly. The best diet for a cat is one that mimics that of its wild ancestors. Those felines ate few carbohydrates, and the prey animals on which they feasted were high in protein.

Dogs, on the other hand, are not obligate carnivores. In fact, there is some debate as to whether dogs are carnivores or omnivores — meaning that they eat plant and animal matter. Either way, the dietary needs of dogs and their digestive systems are quite different from that of felines.

Pet food manufacturers understand these differences and have formulated their products to meet the needs of each species. Cat food typically contains more meat-based protein than dog food. Cat food also tends to be higher in calories and fat.

Is Cat Food Bad for Your Dog?

What should you do if you walk in on your dog devouring your cat’s food? Call the vet? Induce your dog to vomit? If it’s just a tiny quantity, probably not. In most cases, eating an occasional cat food snack will not cause long-term harm to your dog. However, it’s a good idea to keep an eye on your dog if it has consumed cat food, especially if your dog has a sensitive stomach. The high-protein, high-calorie cat food could cause your canine to vomit or have diarrhea.

On the other hand, regularly eating cat food could lead to health issues for your canine. For example, dogs who frequently dine on high-protein, high-calorie cat food could gain weight and become obese. Cat food is also a no-no for dogs with kidney disease. Because kidneys eliminate waste products from a dog’s body, too much protein can increase the workload on these small, bean-shaped organs.

In addition, there are at least two instances where eating cat food could potentially lead to life-threatening conditions for a dog. They are:

Pancreatitis is a severe condition where a dog’s pancreas becomes inflamed. It can come on suddenly and is very painful for your dog. One of the triggers for pancreatitis is eating high-fat foods.

If your dog consumes cat food and develops pancreatitis, some symptoms you might notice include a hunched back, vomiting, pain, lethargy, and weakness. Certain breeds, including many miniature terriers, are predisposed to pancreatitis and older or overweight canines.

Bloat, which is also known as gastric dilation-volvulus, is a life-threatening condition. Further, about 30% of dogs that bloat will die. Bloating occurs when a dog’s stomach fills with air, putting pressure onto the canine’s other organs, the large veins in the abdomen, and the diaphragm. In addition, the dog’s stomach may twist — along with the pancreas and spleen — which could cut off blood to these organs.

Although there are myriad possible causes for bloat, gulping a large amount of food in a short period is believed to be a contributing factor. If your dog has torn a bag of cat food and consumed a large amount, make sure to keep an eye on your pet.

Some signs of this condition include a bloated abdomen, a hunched appearance, attempts to vomit, and restlessness. If your dog exhibits any symptoms, appears to be in pain, and is anxious, take your dog to the veterinarian immediately.

How to Prevent Your Dog From Eating Cat Food 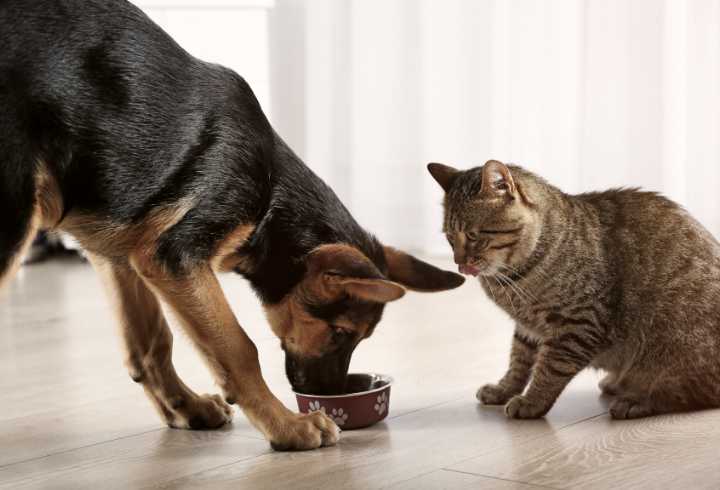 As the saying goes, “An ounce of prevention is worth a pound of cure.” To keep your dog from eating your cat’s food, try the following ideas:

Overall, a bite or two of cat food shouldn’t harm your dog. However, it’s still in your canine’s best interest to keep your feline’s food safely out of its reach.

How to Buy Pet Food Online (5 Tips for New Owners)

Interesting Pet Food Trends to Discuss With Your Vet