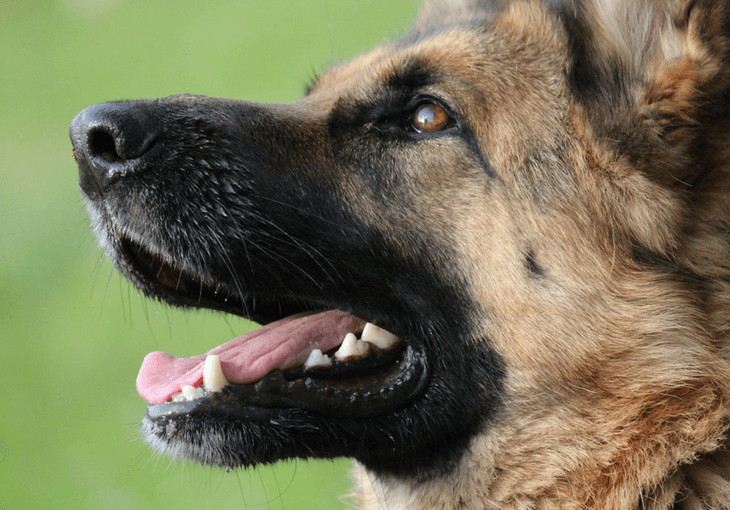 The German shepherd dog breed is by far one of the most popular breeds around, not only in America but in the United Kingdom. It ranks second in popularity in the United States, and fourth in Britain. What makes this breed of dog so popular? Here is everything you ever wanted to know about the German shepherd dog, with some surprising facts as well. The German shepherd received its name from its breeding history. Its development is credited to a cavalry officer named Max von Stephanitz, who lived in Karlsruhe, Germany in 1899. He is said to have mixed some breeds of sheep herding dogs with farm dogs for the purpose of creating a superior dog to herd sheep.

The notoriety of the German shepherd dog breed began to be noticed by Hollywood also. The dog had a starring role in 24 films as the famous dog, Rin-Tin-Tin.

It also appeared on a television series in 1954 called “The Adventures of Rin Tin Tin,” where the dog encountered many dangerous situations and helped to rescue people and restore order in the American West.

The Rin Tin Tin character was so beloved by the American public that they sent nearly 10,000 pieces of fan mail to the dog. The television character, played alternately by several dogs, became famous around the world. Rin Tin Tin IV was a Hollywood star who lived comfortably on a ranch 90 miles from the set, and was visited by adoring tourists.

A Dog Of Beauty And Character One of the reasons that the German shepherd dog was chosen as a service dog to the police is that its size as an adult is formidable. The standard weight for males is 88 pounds, and it can reach a height of 26 inches. It bears some resemblance to the wolf, although it is usually bred to be of tan color. The German shepherd variety most of us are familiar with has a black mask on its face and a black saddle of fur on its back.

The fur coat on this gorgeous dog actually has two layers. The undercoat is dense and thick, while the outer coat is often medium or long-haired. The tan/black or red/black colors are most preferred, but the dog has also been bred in sable, pure black, pure white and blue. The dog has won many awards for its masterful appearance at dog show events.

German shepherds were bred for their intelligence, and they rank third for this trait, only standing behind border collies and poodles on the list. They can learn easy tasks after only five tries, and will obey the first command given to them at least 95% of the time. They are willing to learn and tend to be innately curious.

German shepherd dogs are more intelligent than many other dogs of their size, and because they are also very strong, they make a suitable breed for inclusion in military operations. German shepherds that are being prepared for the police and military must complete an obstacle course as part of their intense training.

German shepherds were used in World War II to alert their soldier companions of the presence of enemy soldiers. They sniffed out booby traps and minefields, and were even taught to parachute from aircraft during that time. They were also used after the catastrophic events of 9/11 for victim detection. That's because they have an acute sense of smell and can be taught to work without getting distracted. German shepherds have over 200 million olfactory cells, as compared to the 20 million that humans have. For this reason, they are commonly used in search and rescue missions. They have also been utilized for the detection of drugs, explosives, and the location of cadavers in a crisis.

This is because although they are fiercely loyal to family members, they can be very aggressive to strangers and unknown dogs. They are also extremely protective to their territory, which is why they are often chosen as guard dogs.

German shepherds have a dominant nature, and sometimes they will try to be the pack leader over their human owners. They need their owners to be calmly authoritative, asserting authority with firm German shepherd training. Otherwise they will be like spoiled children and may even develop biting issues.

These dogs also have a high need for activity. They should not be left alone for any extended period of time, and should be taken out for walks and runs on a daily basis. Try to set the goal of at least a two mile walk per day. Because of this trait, it's better for a German shepherd to be kept at a home with a back yard instead of locked up inside of an apartment.

German shepherds will get bored easily if they have nothing to do. Boredom can make them nervous and destructive. They need to be stimulated with training exercises, games, or other useful activities to keep them engaged. Include them in games like fly ball, Frisbee catching or ring sport. You can let them jog along with you, too, but if you do, be sure they are trained to heel at your side and keep them leashed, so that they aren't a problem to passing strangers.

German shepherds have a number of special physical needs which you should be aware of. For one thing, they are prone to have skin problems. Some dogs have been found to have food allergies which can dry out their coat and give them skin sensitivity. It is important to give this dog the right German shepherd dog food.

These dogs are also susceptible to a long list of health problems when they get older, such as:

It's very important to buy your dog from a reputable breeder, instead of a dog mill or an unknown private owner. Once he is part of your family, be sure to feed him high quality dog food that you either buy or make yourself, and give him regular visits to the veterinarian to keep him healthy.

Get Your German Shepherd Spayed Or Neutered

Spaying of a female is recommended for German shepherds. It can reduce the chances of some diseases that are common for this breed.

Spaying your female shepherd can prevent the incidence of uterine infections and can lower the incidence of hemangiosarcoma, a type of cancer of the heart or spleen which is more common in German shepherds.

It can also eliminate the nuisance of your dog's heat periods, which can stain your carpet and get in the way of travel plans or dog walks. Spaying will help to keep your dog under control, since a female dog in heat can attract a male ready to mate from a long distance away. It will also help to reduce the currently overburdened dog population.

It is also recommended to neuter your male German shepherd dog if he is hard to control. The primary reason for neutering is that it will reduce his aggression. German shepherd males who are not neutered can be distracted easily by females in heat and other males whom they consider to be rivals. Even if your dog is not aggressive, other dogs could consider him a potential rival if he is not neutered.

Neutering a male dog will protect it from prostate disorders, and it will reduce the risk of skin diseases of the anus which are common for German shepherds.

Whether you own a male or female dog, be certain to have these operations done at the correct age by a reputable veterinarian. With proper care, you should expect your dog to live an average of 10 to 12 years.

Many German shepherds have long hair. They shed consistently every day. That means you will be vacuuming a lot to keep a clean house. Regular vacuuming of dog hair is a part of the package of owning this beautiful dog.

You can keep your dog's shedding to a minimum, though. Here are some ways to do that:

IMPORTANT NOTE: If your dog's shedding has recently increased, or if you begin to notice bald spots, this is a sign of a more serious condition and should be checked out by a vet.

When You Buy A German Shepherd Dog

What if you have decided you would like to buy one of these magnificent dogs for yourself? What should you expect to pay? German shepherd puppies purchased from a reliable breeder can cost up to $500.00. If they are show dogs, they can cost up to $2,500.00. You can lower this cost by purchasing your dog from a rescue.

The price at the time of purchase is not the only price you should factor into your decision, however. The ASPCA has advised those considering purchasing a German shepherd that the yearly cost of ownership can average nearly $1,600.00 a year. Total cost of caring for a German shepherd over its lifetime is estimated at $10,000.00 or more.

It's important to get your dog from a reputable breeder. It's also important to research the different types of German shepherd dogs you can get. Although all German shepherds exhibit certain common characteristics, they can still differ according to the exact way they were bred and the way they were treated by the breeder. Unfortunately, some breeders have no understanding of how to take care of this type of dog.

German shepherds are bred for different reasons as well. Some are bred primarily for show. A show dog would not be suitable to use as a guard dog, if that is what you are looking for. Find out the dog's pedigree when you purchase, and be sure to ask several questions of the breeder, until you are satisfied that you are getting the dog you want.

Buying From A Dog Rescue

One of the best places to buy a German shepherd puppy or dog is from a rescue shelter. Most shelters have high standards for the way that dogs will be cared for in their establishment. They are also careful to check the background and requirements of each dog and its prospective owner before selling, to make sure they are the right fit.

You can be confident that they will give you a complete history of the dog that you will be purchasing, including its medical history. Shelters usually do the spaying or neutering and initial inoculations for you, so that you will not have to worry about that cost. They will also advise you about the best care for your dog.

Consider Your Living Environment, Too

You should consider the neighborhood you live in when deciding whether to purchase. Because some German shepherds have an aggressive demeanor, they have been banned in certain communities. Find out what the laws in your community are. Resolve to keep looking until you find a dog that has a stable temperament that will not seem like a threat to others.

A German shepherd can be an intensely loyal best friend, constant companion and efficient guard dog. Be certain before you purchase that you can be the right owner for the right dog.​