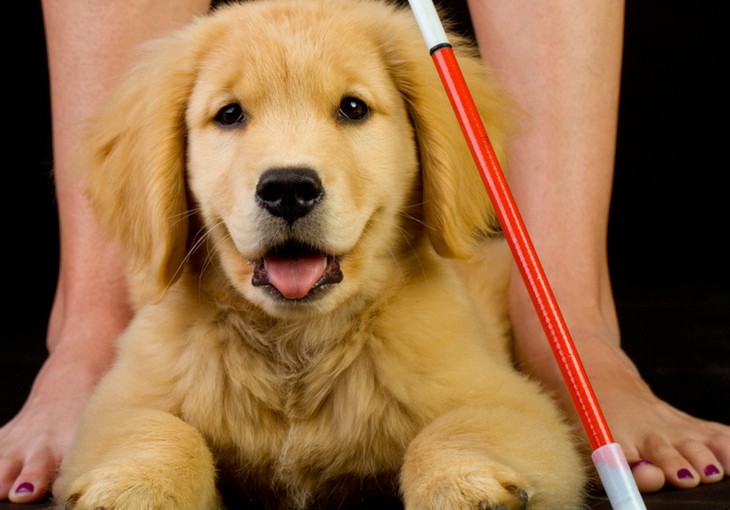 Medical Service Dogs: When a Pet Becomes More Than a Companion

In our last post, we talked about how we train dogs to use their superior canine noses to sniff out the earliest cancer stages. Dogs are saving thousands of lives by catching and treating cancers before cancer spreads.

In fact, dogs are much better at detecting the presence of tiny tumors than any machine or technique used in modern medicine!

Some dogs, such as Daisy, the Labrador we told you about last time, have detected cancer in a human family member without any special training.

It seems it's not only their exceptional olfactory abilities that help them accomplish this impressive feat but also the loving bond they share with their human(s). Also, dogs have a natural knack for helping their humans with other medical issues too. Below, we discuss some of the ways medical service dogs do this. 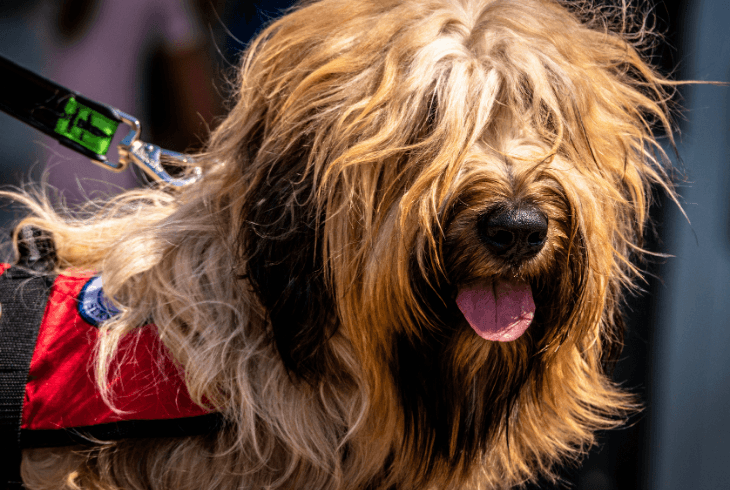 Epilepsy is more common than you may think. According to Citizens United for Research in Epilepsy (CURE), one in twenty-six Americans will get epilepsy in their lifetime. Furthermore, sixty-five million people have it worldwide!

It can be caused by several different genetic abnormalities or by different types of head injuries after birth. Epileptic seizures can also develop at any age, and they often begin with no warning signs! In fact, in about two-thirds of the cases, the cause is unknown.

People with epilepsy often confine themselves to their homes because they are afraid to go out in public. They don't want to have a seizure while driving or at a store, a social gathering, or even while just walking. It's unsafe and embarrassing.

Many even forego working because they are afraid of having seizures at work in front of their co-workers. For these reasons, people with epilepsy often lose their independence.

How Dogs Help People With Epilepsy

Having a dog can often change all this and give people with epilepsy their life back! Some dogs can sense when a seizure is coming on 1-45 minutes before it happens, the timing depending on the person.

When this happens, they may start barking in a specific way, staring into their human's eyes, nudging them, pawing them, licking them, running in circles, or pushing their head against them to alert them that a seizure is imminent.

Their accuracy is remarkable, with many dogs predicting these seizures with 100 percent accuracy. The dog knows well before the human knows!

The dog’s warning gives the epileptic time to take medication that can block a seizure and find a safe place to lie down and let it pass. If they are in a car, they can pull over immediately to a safe place to not cause injury to themselves or others. They also have time to call for assistance.

Many dogs will also stay with the person while they have the seizure and help them in various ways. Some will make sure they stay lying down even when the seizure is bad.

How Dogs Comfort People With Epilepsy

They also provide comfort to the person with epilepsy to keep them calm. Dogs can help people with epilepsy wake up after a seizure, so it doesn't get worse. Dogs can even train to bring the phone or push a select button to call 9-1-1.

Some dogs just naturally know they need to get help and bark just like Lassie did when Timmy was in trouble! Dogs trained in epilepsy also seem to instinctively know they need to protect their human if they are in danger, such as being in the middle of a road or a place or in a place where they could fall a great distance.

SRD dogs are also known as seizure dogs, and many canines can alert and assist. It would even be fully justified to call them heroes because what they do is fantastic!

What's most remarkable about seizure alert dogs and seizure response dogs is that they don't always have to be specifically trained for this. Many seizure dogs develop these behaviors spontaneously after bonding with a human who has seizures, and even after living with a human for a long time, that suddenly develops seizures.

No one knows how dogs can detect seizures before they happen or how they understand it's an emergency, but some scientists believe they smell a chemical change in their human.

One of the best-documented cases of a spontaneous seizure response dog was published in the research journal’s June 2010 issue, "Epileptic Disorders."

An Italian team from the Department of Neurological Sciences, University of Bologna, documented with video and other evidence a Yorkshire Terrier who spontaneously learned to respond to the seizures of a woman with Ring Chromosome 20 Syndrome.

This syndrome occurs with the two arms of chromosome 20 fuse together into a ring, resulting in epileptic seizures and sometimes mental retardation.

The terrier would go and alert the parents that a seizure had started and then immediately run back and push and "play-bite" on her legs to make sure she stayed down.

You can view short video clips of the Yorkshire Terrier's response here. 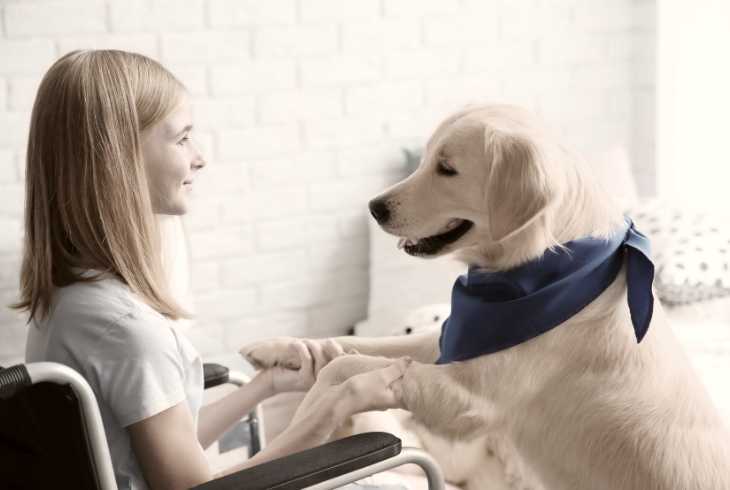 According to the Centers For Disease Control and Prevention (CDC), almost one-tenth of all Americans have diabetes! This percentage is rising very rapidly, and it is predicted by many that about one-third of the American population will develop diabetes in the next few decades.

Diabetes is gaining speed all over the world as well. While most people know that people with diabetes struggle with high blood sugar, many don't realize they are also in danger of having their blood sugar drop very low and passing out or having a seizure as a result.

Low blood sugar can pose a more immediate threat than high blood sugar. Many people with diabetes die in their sleep because of low blood sugar. When a diabetic's sugar drops, there is a specific smell in their breath. It smells like someone in ketosis, with the smell of acetone (fingernail polish remover).

How Dogs Help People With Diabetes

During a diabetic seizure or after someone passes out, most humans can smell the smell if they smell the diabetic's mouth directly. However, dogs can smell the faintest of faint acetone smell and alert a person with diabetes that they have dangerously low blood sugar long BEFORE they get to the point of having a seizure or passing out!

After the dog alerts them, the person with diabetes can check their blood sugar and eat something, usually with sugar in it, and prevent the seizure or passing out from happening.

Dogs that train to help people with diabetes are known as diabetic assistance dogs. However, many dogs seem to pick this up just by being around their favorite human! 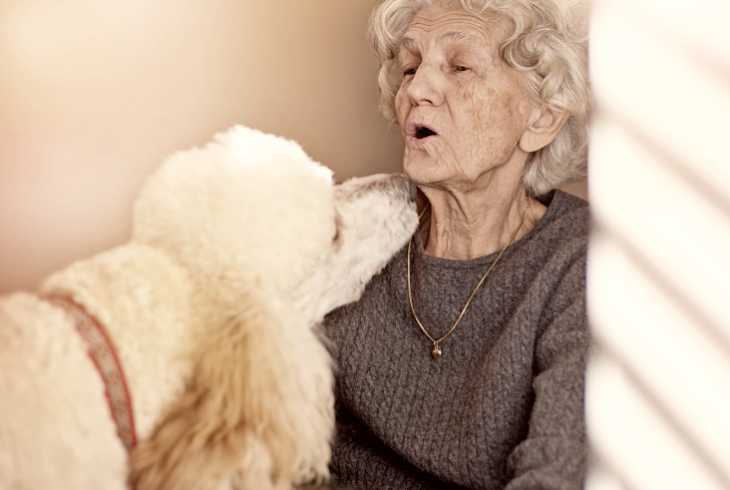 3. Medical Service Dogs For Other Aliments

Autism: Dogs help keep autistic children calm, so they have fewer fits. A dog can help a child with attention deficient disorder stay more focused on the task at hand.

Anxiety & Depression: Canines help ease anxiety and depression in many people without ever being called a medical service dog. They can even sense when someone with a mental health issue is getting angry and purposefully act to calm them down before they do something they'll regret.

Post Traumatic Stress Disorder: Dogs can sense when someone with PTSD is about to break down and re-live their trauma and intervene before this happens.

Strokes: Medical service dogs help people who have had a stroke to make a connection with the world again. In some cases, these dogs get stroke survivors to talk again

Migraines: Migraine alert dogs can alert a person before a migraine starts so they can lie down in a dark place and let it pass before it develops into a full-blown migraine!

Infections: There are even "infection detection dogs" who can sniff out infections. One dog sniffed out a pulmonary valve infection on his human master in time to be cured!

Some hospitals have dogs trained to track down very specific infections such as Clostridium difficile so they can know early on who has caught the bug.

In addition to direct medical tasks, dogs help us stay healthy in many other ways as well. Next time, we'll talk about how dogs can detect bed bugs with fantastic accuracy and protect you and your family in the process.