How to Train Your Dog Basic Commands: The Hairy Trinity
0 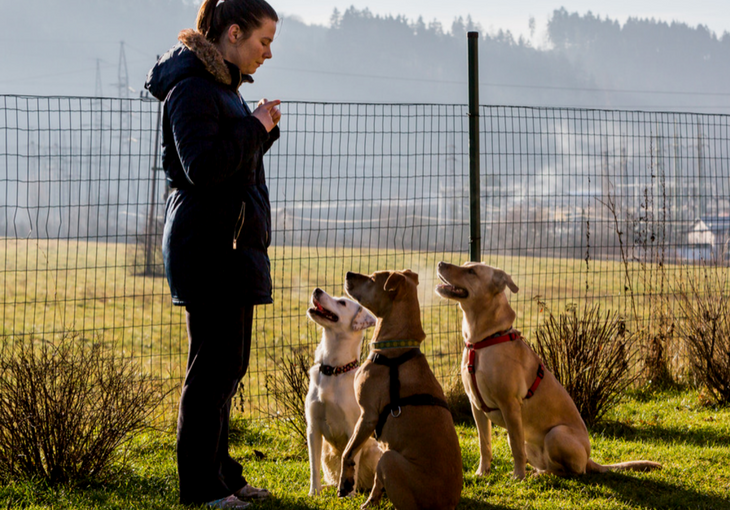 How to Train Your Dog Basic Commands (The Hairy Trinity)

Do you wish your pup had impeccable manners? But instead you have a furry little maniac. It’s probably just a matter of miscommunication. Cross-cultural communications can be a challenge with humans and, with dogs, it can be like Kilimanjaro. Thousands of years of genetic programming has dogs poised and ready to please you. So, it’s not hard to learn how to train your dog basic commands. You just need to teach them a few basic words. These three are The Hairy Trinity: ‘sit,’ ‘stay,’ ‘come’.

What You Need to Train Your Dog Basic Commands Anatomy of A Command

When dogs communicate verbally they use tone, tempo and volume to convey their message. We humans, on the other hand, use words. The great divide can be crossed with the appropriate and consistent use of words and/or sounds.

If you decide to vary from the standard command terms, it is usually best to keep the command to one word and choose commands that each have a different vocal sound.

Consider this, understanding one word in another language is fairly easy for a person, while learning a phrase can be a struggle. This is true for your pup too. Saying the command multiple times or continuously talking can turn your poor pup’s brain into a mushy ball of confusion. With training, your little sweet paws will clearly understand one-word commands.

But trying to ‘enhance’ the command by repeating it numerous times in rapid succession or, heaven help us, trying to turn the command into a sentence or two - or ten - will not promote your cause.

So, when you mean ‘Sit’ try to avoid saying “Sit…Sit…Sit” or coaxing with something like, “Will my sweet little Snookems please sit for momma? You’re such a good little girl I know you can do it…”

Tone also makes a difference to your pup’s understanding. If you shout the command one time then whisper it another, your dog will, in essence, need to learn that these two commands mean the same thing.

A calm, assertive tone is generally recommended. But if you’re not that sort, choose your tone and stick with it.

PRO TIP: Because dogs are often more visual than verbal, pairing hand signals with commands can help your fur-footed friend recognize commands more quickly. Check this out for more on canine body language.

How do you know when you have succeeded? You get recognition. You get paid. You get a gold star. Rewards are important for your little learner too.

Each dog is different. What motivates your sweet paws may be completely different from mine.

Treats are often a good tool in your reward arsenal. But toys, praise and other rewards are options too.

Clickers have the benefit of a consistent sound. But they’re not for everybody. If you opt for a clicker, you will need to teach your guy that click means “good job!”​

Here's a Video to Get You Started

Sit is the mother of all commands. It helps you let your pooch know that you want him to stop what he’s doing and sit down. Luckily, it’s also one of the easiest to teach.

Repeat this exercise a few times every day. When he gets the hang of it, have him sit before you go out the door, before you serve him dinner, when guests arrive, etc.

PRO TIP: The best way to prevent or replace bad behavior is to substitute good behavior. ‘Sit’ is often the go-to command. For example, rather than saying, “Don’t jump!” say “Sit.” It is much easier for a pup to understand a positive command (do something) than a negative one (don’t do something). It’s best to teach this command after your guy has mastered ‘Sit’.

Stay may be tough for dogs with low attention spans, but teaching them to stay will help them comprehend the value of delayed gratification. It will also give you the freedom to trust that your dog will not bolt when you need for him to be calm and collected.

PRO TIP: You may want to establish a release command to tell your dog that it’s OK to get up from a sit. I use “Come” but your mileage may vary. You may also want to establish a failure feedback sound or word. I use a sound that’s like the first ‘ah’ in, “ah, ah, aaaaah” or would it be “uh, uh, uuuh”? It’s tough to write, but the message is clear to my little girl. ‘Come’ can be a tough command. When you say “Come,” you are asking your dog to quit doing something they’re enjoying and cater to your whims. Or at least that’s how they see it.

But this is also among the most important. It will keep your pup from straying too far away and keep him from a laundry list of hazards.

Once your dog has learned to come on a leash, move to an enclosed area that is free from distractions, or at least as much as possible, and continue the practice off leash. Vary locations so that he doesn’t think that ‘Come’ only applies in one area.

In a crisis, if all else fails, run away from your dog calling him with great excitement.

Subtext: “Hey, the party is over here!”

Your dog may assume that you want him to go the way you are facing…as a canine pack leader would. Plus, who doesn’t love a game of chase.

PRO TIP: Always reward your dog when he comes. You have asked him to give up something, so it’s only fair that he gets something in return. If you say “Come,” then snap on a leash and take them home from the park. Well, they may not be so keen to come the next time. NEVER say, “Come” in an angry voice. Getting mad will only make your pup want to run away…not come. Positive reinforcement works, anger doesn't For more on positive training, check out this blog at theonlinedogtrainer.

Now that your dog knows the hairy trinity of commands, you are ready to combine them.

Go through the following commands in order:

See how that works? Clever, huh?

With these three basic commands you have a solid base for expanding your common vocabulary and knowing how to train your dog basic commands.

These three commands have been a trifecta for me and my little girl. I hope they are the same for you and yours.

9 Easy Exercises You Can Do With Your Dog

8 Fun Games to Play with your Dog

7 of the Most Effective Dog Training Methods

How to Introduce Your Dog to Water for the First Time

When Should You Stop Giving CBD To Your Pet?
How to Train Your Puppy to Use a Potty Bell
Goldendoodle – The Popular Mixed Breed That Doesn’t Shed
Why Is My Dog Barking So Much?
9 Easy Exercises You Can Do With Your Dog
How To Keep Your Dog Safe From Pet Theft
5 Ways a Pet Sitter Can Help Improve Your Dog’s Behavior
8 Fun Games to Play with your Dog
5 Steps to Find the Perfect Local Veterinary Clinic For Your Pets
6 Reasons to Groom Your Dog