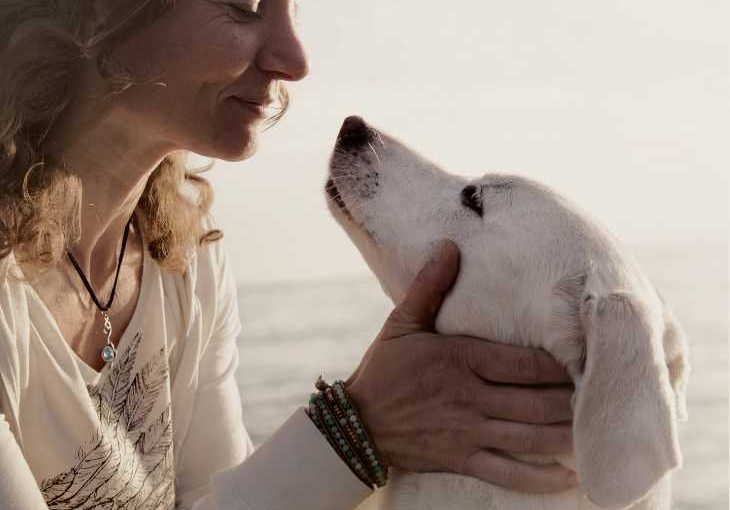 Why Do Dogs Like Us So Much? [An Inside Look]

What is it about people and dogs? There's no other animal we've integrated with so well on such a large scale. Not even cats. We live with cats, but cats just tolerate us. For cats, people are usually just a source of food and a scratch.

Dogs, on the other hand, light up when we walk in the door. Why is that? Why do dogs like us so much? And why do dogs often prefer one person's legs as opposed to another's?

Dogs are pretty sociable animals. There's considerable evidence that humans are largely responsible for this.

Ten millennia ago, when humans first began domesticating dogs, they weren't that distinct from wolves. Dogs ran wild in packs and hunted. However, we've managed to breed the aggression out of most dogs.

Human homes and human beings have replaced the pack.

Dogs aren't really solitary animals. They like to be with other dogs or people. We've provided the perfect environment for dogs to adapt to people and thrive.

We've all had the experience of interacting and coddling with small children. Right? We know that if a child feels loved and wanted, not only do they grow up better adjusted, they tend to be bonded towards the adult who showered them with that kindness and attention.

You might not specifically recall why, but you instinctively know that Uncle Pat is a good egg and will back you up when needed. Dogs respond in much the same way as children. Like, little kids, dogs need rules, attention, and guidance when they are young. Have a puppy in your home, treat it kindly and you'll have a friend for life.

The importance of bonding to explain why dogs like people and some people more than others cannot be overstated. Similarly, dogs respond to the environment around them. Like children, canines do best in warm, relaxed and calm environments.

An overly submissive, subdued dog is a sign of environmental stress. This can also manifest in behaviors like excessive licking, hyperactivity, barking, and shedding. Dogs thrive in environments where there is structure. Again, much like kids.

Most people tend to treat their dogs as one of the family. Households without children can really ramp up the kid substitute model. The result is a positive environment, where the dog can live and grow around people who it is familiar with.

Dogs Respond to Kindness and Attention

We all know most dogs enjoy a pat. A belly rub causes some to go positively troppo. That's okay, as humans we generally enjoy the positive response.

In a small part of our brain, we get a small burst of pleasure out of making our dog happy. It's a tiny little bit of that bonding process that has so successfully linked humans and dogs together.

When your dog rolls over to have its belly rubbed you should take it as a compliment. It's a sign that your dog likes and trusts you. The stimulation of rubbing your pets belly hair, sets off neural pleasure pinging in their brains. Your dog learns to associate pleasure with belly rubs and belly rubs with you.

Why wouldn't you like someone that makes you feel great?

Paying your dog some attention is another factor that can draw him towards you over another person. It's easy to ignore your dog when you're busy. There's a deadline looming and your dog is sitting at your feet looking at you while you tap madly away on your laptop.

It doesn't have to be elaborate attention; eye contact, maybe a scratch with an outstretched foot while you keep typing. Dogs, like people, respond well to attention. It engenders loyalty and trust. When you think about it, it's not that complex.

It's already been noted that dogs are traditionally pack animals. In that aspect, they are a lot like humans. Most humans don't do extended solitude that well (I know I don't). However, we don't just partner up and have children to continue the species. We do it for comfort and companionship.

Wild dog packs still exist in some parts of the world. According to National Geographic, these dogs are highly sociable. They share, care for weaker members of the pack, and communicate by touching, acting, and vocalizing. For the most part, dogs can now do all that in a human household.

They interact with us socially. We feed them, touch and talk to them. In response, most dogs are empathetic enough to give you a nuzzle when you are down or bark when they perceive danger around.

Trained dogs can be great around your children because they perceive these small people as more vulnerable members of the pack who need a degree of protection.

We provide more practical needs too

Most dogs see us as the provider. As we feed and shelter our dogs. Canines are conditioned not just by hunger, but also by, the time of day and human behavior. Which will tell whether or not we are going to pony up with some snacks.

They know if they come to the back door just after sunset on a cold night you'll probably let them in to lie in front of the fire. Moreover, they know you'll usually take them for a run in the park later in the afternoon when you get home from work.

As a dog owner, a human's role is to be a provider. Therefore, your dog is going to be reasonably well disposed towards the hand that feeds him.

Why do dogs like people and certain people, in particular, are both a result of evolution and upbringing. We've spent ten thousand years trying to breed the snarls and hunting instincts out of dogs, focusing on the sociability and loyalty traits we so enjoy.

By bringing dogs into our homes and treating them as one of the family - often as one of the kids, we train them to behave and respond in certain ways.

Humans in the household who treat a dog kindly, pay it attention, play with it, maybe even let it sleep on their bed, can reasonably expect a fair degree of reciprocation from their dog.

It's not rocket science. Dogs are emphatic and smart. They know who's who.